If you haven’t seen Panos Cosmatos’s 2018 film Mandy, stop reading this immediately and go watch it.  It’s one of the best films of this decade, it’s quite possibly the greatest role Nicolas Cage has ever said yes to, and I’m about to extrapolate and ramble on about how amazing it is with a whole pile of SPOILERS.

Mandy can be unpacked in about 100 different ways, and I’m no film critic, so I’m going to scratch the surface of what calls out to me most profoundly.  If by the end of this you’re inspired to watch it again, fantastic, this movie should be watched numerous times.  It’s visually stunning, atmospherically manic and unnerving, and emotionally enthralling.  I feel drained every time I finish watching it, in the best possible way. The first half of the film establishes a couple of complexities: 1) Red and Mandy are deeply in love and emotionally invested in one another. They have their own little corner of the world with everything they need in their own personal paradise; 2) Personified Evil is brewing and threatening to destroy this paradise. I’ll touch on themes later on, but for now I want to examine the movie at relative face value.

During Mandy‘s first act there’s a constant feeling of anxiety and foreboding.  It’s obvious to us as viewers that something terrible is going to happen as we bounce back and forth between Red and Mandy’s perfect relationship and the unnerving Manson-esque “Children of the New Dawn” cult hanging around the Shadow Mountains.  When Jeremiah and crew spot Mandy walking alone through the forest, we can immediately decipher that his gaze isn’t one of passing admiration.  The lingering close-ups of Mandy’s face as the van drives past her let us know that Jeremiah is obsessed.  This sickening feeling is reinforced when we see the lengths he’ll go to possess her.

Jeremiah’s right hand man, Brother Swan, calls upon the terrifying Black Skulls to help him obtain Mandy for his master.  From the moment we see him produce the ocarina-like talisman to summon the Black Skulls in all their leather-clad, S&M biker glory, the movie plunges into literal and metaphorical darkness.  The supernatural horror of these demons abducting Mandy is followed by the real horror of her being drugged and coerced into the cult’s inner circle.  Jeremiah believes he is God (or at the very least a god) and he’s certain the new apple of his eye will naturally fall in love with his power and influence. 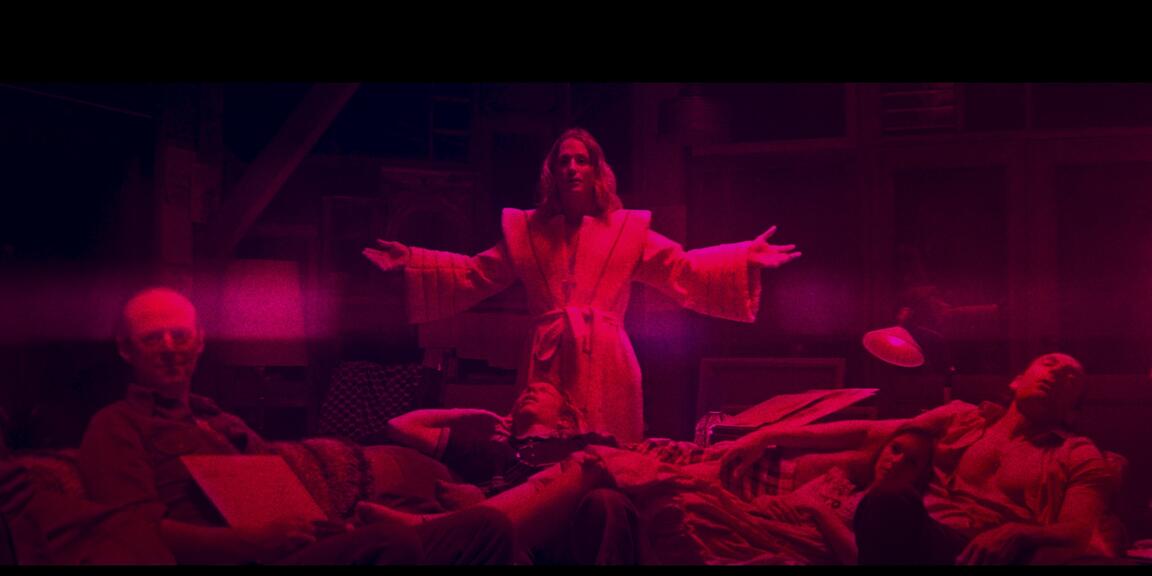 Mandy of course is much stronger than all that.  You could argue that she knows she’s not making it out of her home again alive.  She scoffs in the face of her assailants; she laughs directly into Jeremiah’s face at his cheese-ball god complex and his overconfident sexuality.  Mandy’s defiance emasculates Jeremiah so much he loses all composure, changing from a self-assured prophet to a petulant child who isn’t getting his way.  Mandy’s last breaths are spent showing this weak monster that he will never have her, that she’d rather die than give herself to someone so pathetic.

The outcome is that Red loses the most important person in his life, and he has to watch it happen in graphic detail.  His reason for living is burned out of existence before his eyes while the ones responsible watch and revel in his devastation.

The first act of Mandy is essential.  It sets up the rules of the world we’re viewing.  It keeps you on edge just long enough to make you fervently crave a reprieve from the cruelty.  It sets up the rewarding payoff of Red’s vengeance in the second act.

The exact midpoint of Mandy is the inexplicable “Cheddar Goblin” commercial Red sees upon freeing himself and going back into the house.  Cosmatos places this scene strategically, directly after Red sees the last ashes of his beloved Mandy blown away in the wind.  The commercial sequence is so bizarre and surprising it’s almost impossible to do anything but laugh.  After the emotional exhaustion of watching Mandy meet a horrible death in front of her lover, Cosmatos lightens the mood memorably.

Act two is for fist-pumping. Red’s full of rage, vodka, cocaine, and some kind of tainted netherworld mercurial LSD.  Let the bodies hit the floor.

Red dispatches the Black Skulls like a martial-arts superhero with a variety of weapons.  One gets lead-piped into a bottomless pit.  The next (one of the more disturbing and terrifying creatures in the whole film) gets a box cutter tracheotomy.  Then Red is free to find his crossbow (the aptly named Reaper) and his shiny chrome battleaxe.  He uses both to pick apart the last poor bastard before lighting a cigarette on his flaming, severed head.  If you’re not hooting and hollering at the screen after that you need to check your pulse.

Red then goes down his hit-list of the “Children of the New Dawn” members.  Brother Swan meets an extremely satisfying (and disgusting) end.  A chainsaw battle with another cultist marks one of the most intense fight scenes you’re likely to see in any film.  Mother Marlene and Jeremiah get their comeuppance in a dungeon labyrinth.  As soon as Red finishes Jeremiah with his bare hands you can visually see the release on Red’s face.  There’s nothing left for him to do.  He punished each and every person who took Mandy away.

The final sequence flickers back to the tinges of sweetness that peek out throughout the film like little plants in the cracks of a concrete structure.  Even after all the visually arresting colors and environments, the buckets of blood and gore and pure unadulterated testosterone, the core of this film is a love story.  Red learns what so many people have learned before him: revenge can’t bring someone back.  He looks longingly into the past and our heartstrings are pulled along behind his muscle car as he drives into the purple horizon.

Mandy is a metaphor for loss.

Look at Mandy as an allegory.  Red is a quiet man living a quiet life.  It’s hinted at throughout the movie that he’s dealt with past trauma and perhaps overcame alcohol and drug addiction.  The tender scenes between Red and Mandy further emphasize that they are codependent on one another.  Mandy dealt with trauma of her own (as shown explicitly in her story of the starlings).  These two found their reason for living and it was to take care of one another and live peacefully away from the loud, confusing world.  At one point Red frets about living so far off the beaten path and Mandy pushes back; she likes their isolated life.  Ironically it’s this isolation that ends up being their downfall, and even more ironically Red felt it coming.

Take Mandy’s death as literal (outsiders committing a heinous crime) or completely metaphorical (she dies in any number of ways we aren’t meant to know) and the outcome remains the same.  Mandy is taken away from Red too soon and too cruelly.  She is his rock and his reason for the straight and narrow.  He is not a slave to his addictions; he works a nine to five and comes home to his lover.  He’s happy.  Then suddenly he’s lost.

When Mandy dies some of Red’s first actions are to dive into substances.  He drowns himself in vodka during an initial manic outpouring of grief.  As he begins to fight his demons he tries every drug he can get his hands on.  His rage is channeled into destroying every memory of Mandy’s suffering.  When his demons have all been dealt with, Red reaches the elusive final step of the grieving process: acceptance.

Mandy is a commentary on organized religion.

Religious imagery pervades Mandy.  The “Children of the New Dawn” have formed their own religion of sorts.  The followers of Jeremiah Sand will do anything he asks of them, regardless of its seeming insanity or cruelty.  Jeremiah is a messiah figure who shows two contradictory sides: omniscience and petulance.

Biblical scholars have commonly cited these clashing sides of the Christian God.  God frequently asks a disciple of His to prove how much they love him (such as Abraham being asked to sacrifice his own son) which should seemingly be a trivial issue for an all-seeing all-knowing deity.  Why does God care so much about what we think of Him?  Isn’t that level of self-consciousness a particularly human trait?

Jeremiah waxes poetic about how he has been gifted with the ability to have anything he wants and do anything he wants.  Yet when Mandy defies and embarrasses him he becomes vengeful and hysteric.  He’s reminded that he is not as powerful as he thinks he is and it takes him some time to rebuild the illusion.

Red is bound and gagged with barbed wire like some version of Christ on the cross.  If you somehow happened to overlook this parallel at first glance, the Children make it even more obvious when they use a talisman to pierce Red under his ribs (see: Spear of Destiny).

The whole of the second act even reads like Dante’s Inferno, with Red travelling further and further into Hell.  His final battles take place in a severely distorted version of a church.  Before descending into the labyrinth, Red takes a good long glance at what appears to be a Bible before comically tossing it aside with disinterest.

Mandy is an homage to nerd culture, heavy metal, and Heavy Metal.

Mandy reads fantasy novels filled with wizards and enchanted gemstones.  She wears well-loved t-shirts emblazoned with Mötley Crüe and Black Sabbath album covers.  She transfers this love of all things 80s counter-culture chic into her striking artwork.  The whole thing reads like a clip from 1981’s Heavy Metal specifically, most assuredly when we get the morsels of the film that are animated in that very style.

I think there’s something to be uncovered about this as well when talking about the world that Mandy and Red live in, and possibly relating to any sort of theories about this being a purely metaphorical film.  Mandy prefers to live in fantasy, both in her hobbies and interests, and also in her real life.  Staying nose-deep in her novels and artwork, wandering through an untouched forest at will, swimming nude and free in a pristine lake; everything about her world seems too good to be true.

When Red sets out on his odyssey of carnage the film may not be animated, but it may as well be.  The scenes feature eye-searing DayGlo colors, architecture full of vivid geometric patterns, and bloody fight scenes that are normally reserved for gory anime films.  Every thing about the film’s second half screams “heavy metal music video” or “Heavy Metal: Part II.”

You could make the case that Red’s journey in act two is actually a journey through a world that Mandy created.  One of the more interesting pieces of “evidence” for this are the subtle re-callings we’re shown; my favorite speculation on this stems from Red’s tiger shirt/Mandy’s mythical tiger drawing/The Chemist’s actual caged tiger that doesn’t seem to serve any realistic purpose other than to look cool as hell.  Maybe there’s even a case for Mandy having taken her own life; Red fighting all of these demons is an allegory for coming to terms with someone important leaving his world, and he’s learning to grieve and forgive.  You could probably also make the (extremely tired and boring) case that he’s dead or dreaming. Mandy is a rare film that’s hard to watch AND harder to take your eyes off of.

There’s a whole lot of beauty in all of this ugliness.

View all posts by Dylan